City of Austin leaders set an ambitious goal in 2014 to build a 400+-mile connected bicycle network winding throughout the city through a community-driven process that would give Austinites a choice in how they get around no matter the person’s age or ability.

The Austin Transportation Department, along with several public and private partners, has been steadily working on the network since, looking for opportunities to build and connect bikeways, talking with residents about their needs, and completing the work to get the All Ages and Ability Bicycle Network (AAA Bicycle Network) on the ground.

Nearly seven years after Austin City Council set the city’s vision for the network as part of the 2014 Austin Bicycle Plan, and despite delays caused by the global COVID-19 pandemic, Austin is now more than halfway to its goal with 215 miles of the network built as of September—making it one of the few North American cities to have reached such a milestone.

The AAA Bicycle Network is a citywide, interconnected network of protected bicycle lanes, neighborhood bikeways, street crossings and urban trails, all designed to make getting around the city comfortable for everyone in Austin riding a bicycle or scooter, whether they are 8 years old or 80. Today in Austin, more than 600,000 people, or approximately 64% of its 950,000 residents, live within a half-mile of an All Ages and Abilities Bikeway with a dedicated path to ride that provides them a buffer from traffic.

The ongoing progress is thanks in large part to the support of Austin residents. In November 2020, city voters approved a $460 million mobility bond that included $220 million for sidewalk, bikeway and urban trail projects following prior funding for the network in 2016 and 2018. Full buildout of the AAA Bicycle Network is expected to be completed ahead of schedule by 2025.

"Austinites want the bike network up and running quickly! In 2020, voters overwhelmingly approved tripling investments in our bikeway and urban trail network, even as they were voting to approve Project Connect,” Mayor Steve Adler said. “Together, the All Ages and Abilities bikeway network and extensive public mass transit will offer affordable, safe, carbon-free mobility options across this growing city.” 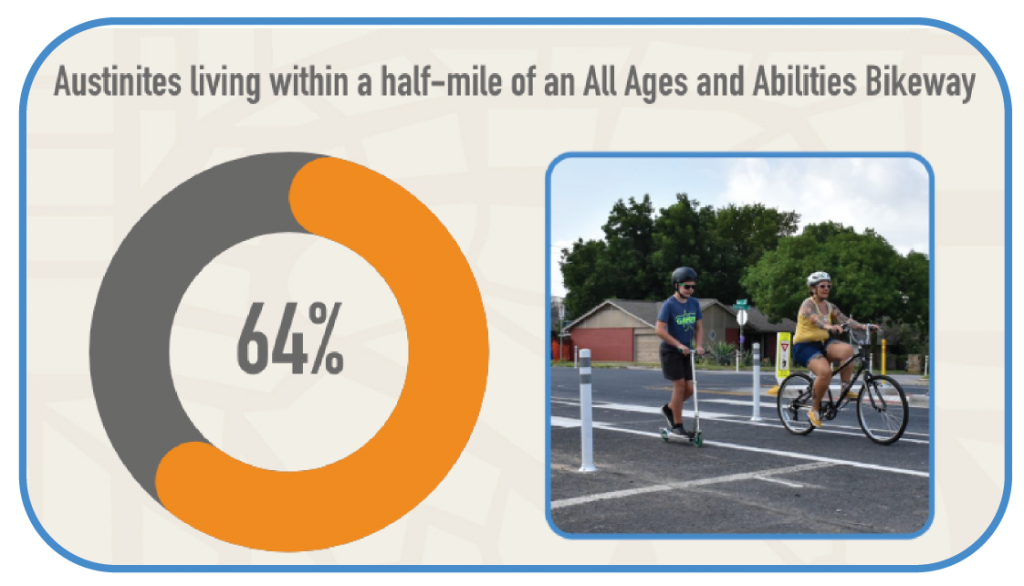 The AAA Bicycle Network surpassed the halfway milestone at the 207-mile mark on June 19th, upon completion of the protected bicycle lane on Guadalupe Street from Koenig Lane to Airport Boulevard. Since 2018, 100 miles of the AAA Bicycle Network have been constructed, the most recent of which is a nearly 5-mile stretch of protected bikeway on Manor Road between Dean Keeton Street and Springdale Road that completed construction in late August.

“This milestone is a remarkable achievement that shows the city’s commitment to its long-term multimodal transportation goals,” said Assistant City Manager Gina Fiandaca, who oversees mobility. “Building out this All Ages and Abilities bicycle network to encourage bicycling benefits the entire community by improving mental and physical health, delivering on Austin’s Climate Equity Plan and fostering a livable, affordable and sustainable future for all Austinites.”

Building the AAA Bicycle Network is a crucial piece of the city’s transportation plan to give people choices as to how they get around while Austin experiences an ongoing population boom and related traffic and mobility issues. The Austin Strategic Mobility Plan (ASMP), passed by City Council in 2019, set a target to increase the number of people who take transit, telework, walk, share a ride, ride a scooter or bike to 50% in 2039, matched with 50% of people who drive alone.

There are many avenues to achieving that 50-50 mode share split, including increasing the number of employees teleworking, making transit time-competitive with driving, and making bicycling safer and more comfortable. One crucial element toward that goal recognized in the ASMP is building out the AAA Bicycle Network, a key strategy in achieving the called for five-fold increase in bicycle mode share.

Building a bicycle network for more residents to ride in comfort benefits not only people who choose to bike for some trips, but also everyone else. Bikeway facilities can offer a protective benefit to pedestrians as they walk along and across the street as well as a positive influence on calming traffic speeds in neighborhoods. And increasingly, bikeway projects are designed and built in combination with other mobility and safety improvements such as pedestrian crossings, left turn lanes, street lights and floating bus stops to make it easier, safer and more accessible for everyone who uses the street. 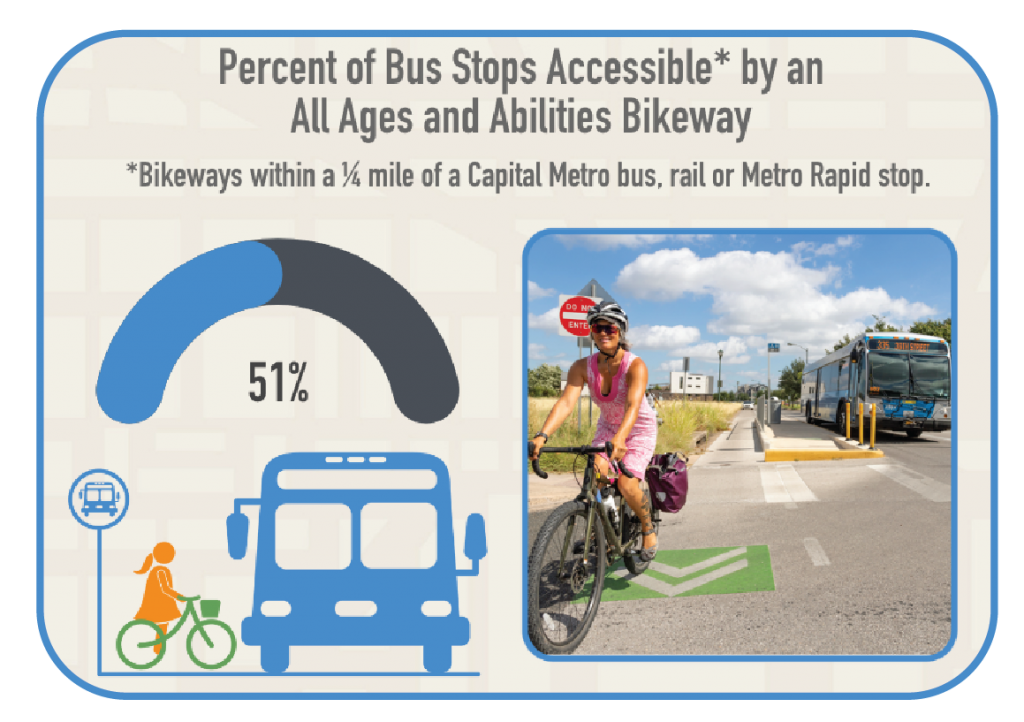 The more than 200 miles of the AAA Bicycle Network built to date come from a variety of partners and funding sources. Austin Transportation has built approximately 76 miles of the network, and other partners include Austin’s Public Works and Parks and Recreation departments; other governmental transportation organizations such as the Central Texas Regional Mobility Authority and the Texas Department of Transportation as well as private developers.

You can find more information on the AAA Bicycle Network here, including an interactive map of recently completed and upcoming projects. A video highlighting the milestone is also available here. 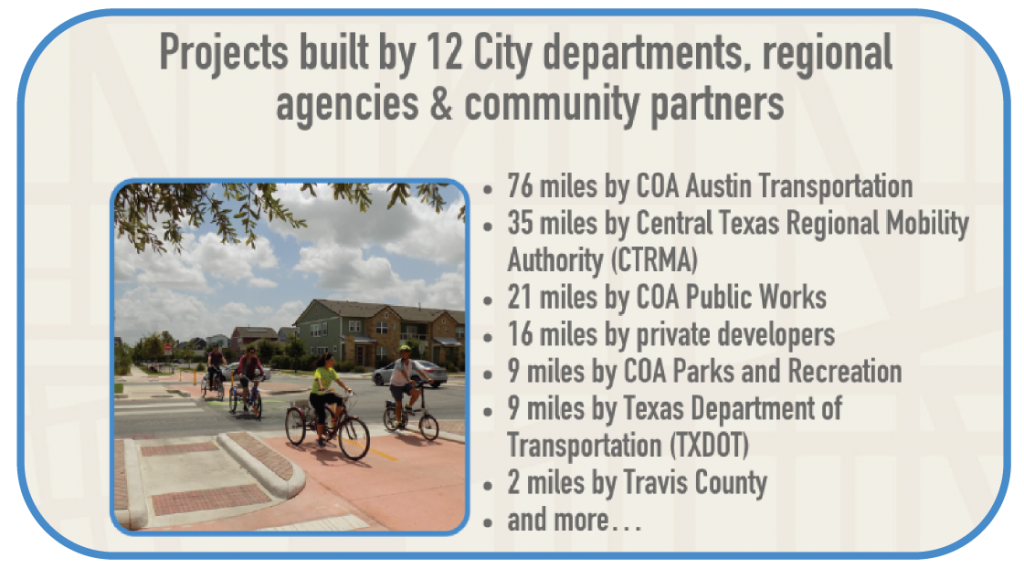 In collaboration with area partners, Austin Transportation Department leads our community’s Vision Zero goal of eliminating traffic deaths and serious injuries on Austin streets, the achievement of a 50/50 commute type split by 2039 as established in the Austin Strategic Mobility Plan, and actively seeks innovative solutions and piloting technology that can decrease the use of single-occupancy vehicles and improve safety through Austin Transportation Department's Smart Mobility Office. For details, please visit AustinTexas.gov/Transportation.

Warming Centers Available During the Day The City of Austin and partner agencies will be opening warming centers and cold weather shelters t... 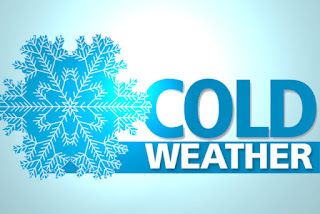