The Austin Police Department Lake Patrol Unit will enforce the City Ordinance that prohibits the use and operation of personal watercraft, wet bikes, motorized surfboards, and similar devices (designed to be operated by a person sitting, standing, or kneeling on the vessel) on Lake Austin.

The enforcement will begin at sunset on Sunday, July 3, 2022, and end on Tuesday, July 5, 2022, at sunrise, as outlined in Ordinance 8-5-81. Non-motorized devices such as kayaks, canoes, and paddleboards can still be used along with watercraft designed for the conventional manner of sitting or standing in the vessel.

The annual ban on personal watercraft is necessary to ensure the public's safety that use the lake and parks over the 4th of July Day Holiday Weekend. This ban only applies to Lake Austin. Police will  patrol Lake Austin this weekend and urge people using waterways to follow the Texas Water Safety Act and City of Austin boating laws and ordinances. One of these laws that most boaters are unaware of is TWSA 31.123, which is the Required Response to Police Water Safety Vessel. The operator of a vessel underway, on sighting a rotating or flashing blue beacon light, shall reduce power immediately and bring the vessel to a no-wake speed and subsequent stop until the intention of the water safety vessel is understood.

We would also like to advise the public about the extension of the new no/slow-wake zone (in purple) on Lake Austin by the Pennybacker (360) Bridge. 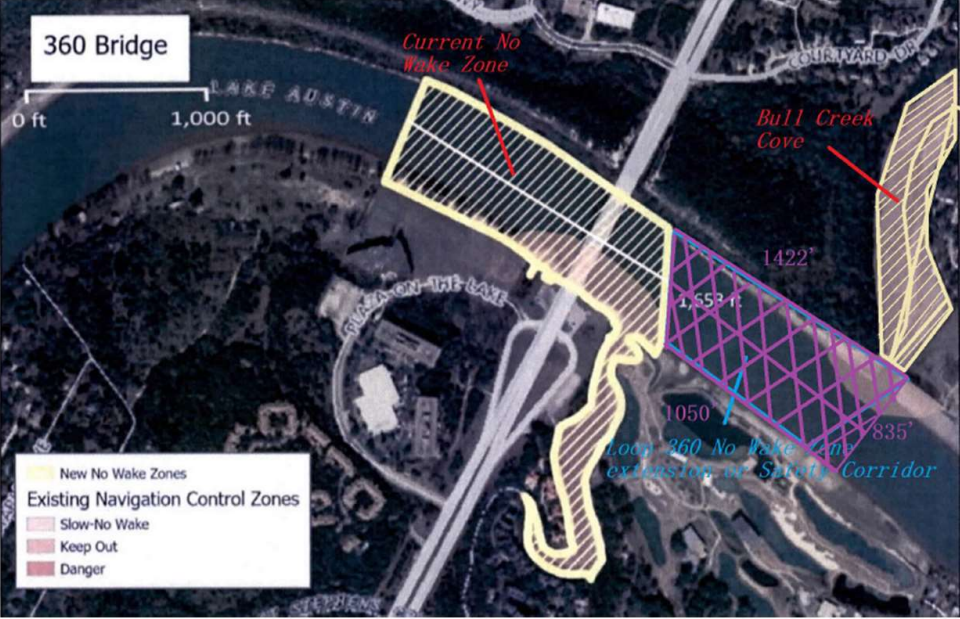 Police urge all boaters to practice safe boating and to call 9-1-1 for all reckless operations of boats or emergencies.

The Austin Parks and Recreation Department and the Austin Police Department want the public to enjoy the parks and lakes but urge people to make this a safe holiday.

City Ordinance:  8-5-81 WATERCRAFT AND OTHER MOTORIZED CRAFT ON LAKE AUSTIN.

(A)     A person may not use or possess a jet ski, wet bike, motorized surfboard, or similar device on Lake Austin:

(1)     from sunset on the Friday before Memorial Day until sunrise on the Tuesday after Memorial Day;

(2)     from sunset on the Friday before Labor Day until sunrise on the Tuesday after Labor Day; or

As an update to Austin Public Health’s (APH) initial announcement, the Centers for Disease Control and Prevention (CDC) testing has confirmed Travis County’s first monkeypox case. APH Epidemiologists have completed an investigation and are conducting contact tracing of people who had direct close contact with the resident while contagious.

The resident continues to isolate at home. APH is also investigating five presumptive cases who have symptoms that are consistent with monkeypox. Initial case investigations indicate these persons did not have a history of international travel.

“This spread of monkeypox within our community is concerning. Anyone who believes they may have symptoms of the virus should reach out to a medical provider immediately,” said Dr. Desmar Walkes, Austin-Travis County Health Authority. “This virus is predominantly spread through close, intimate contact with others. You should avoid skin-to-skin contact with anyone showing rashes or sores.”

Monkeypox is rare and does not spread easily between people without close contact. The virus can be transmitted by person-to-person contact including:

Symptoms of monkeypox can include:

There are a number of measures that can be taken to prevent infection with monkeypox:

As of Thursday, the CDC is tracking at least 396 monkeypox/orthopoxvirus cases in the U.S. At least 10 cases have been confirmed in Texas.

As lifeguard hiring and training continues, new pools will open for the July 4 weekend. Martin (1626 Nash Hernandez Sr. Rd.) and Dottie Jordan (2803 Loyola Ln.) pools will reopen on Sunday, July 3. Beginning July 10, Ramsey (4201 Burnet Rd.) and Mabel Davis (3427 Parker Ln.) pools will open. To allow greater access over the July 4 weekend, Deep Eddy Pool is rescheduling its normal monthly closure from Tuesday, July 5 to Tuesday, July 12. On July 5, the pool will be open 8:00 AM - 12:00 PM for lap swim only and 12:00 PM - 8:00 PM for recreational swimming.Increased pool operations come as the Austin Parks and Recreation Department reaches 551 lifeguards ready-to-work. The Department continues to hire and train lifeguards to operate summer pools. Pay ranges from $16 to $19 an hour depending on experience and certifications. Staff get bonuses, paid sick leave, a free bus pass, and flexible scheduling. Information on becoming a lifeguard is available at lifeguardaustin.com.For a complete listing of pool schedules, visit austintexas.gov/pools.

Several City of Austin offices and facilities will be closed today, Monday, July 4 in observance of Independence Day Parks and Recreation ...